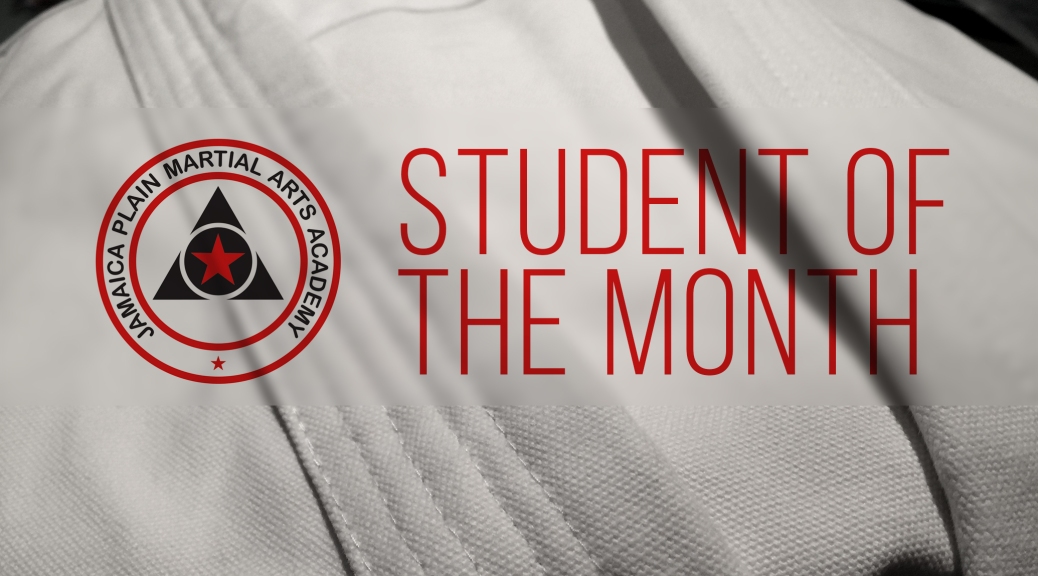 We are pleased to announce that ANGELA JOHNSON is our JPMAA June Student of the Month. 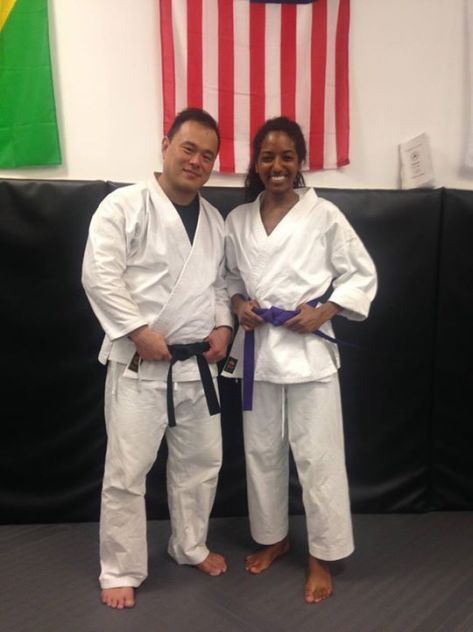 Angela has been with our Dojo since we opened in 2013. She came in wanting to do kick boxing; we did not have that class but she liked the karate classes. Angela began at White belt, but because she had had previous martial arts experience and knew Kata (especially the Heians) she quickly earned her Green Belt. Angela received her promotion to Purple Belt in May 2014. She Is liked and respected by all as an excellent training partner and a formidable sparring opponent!

We asked Angela some questions about her training and her experience at JPMAA:

When did you first begin training at JPMAA (or Mass Bay BJJ)?
I joined in January 2013. I started out with a free trial and then I never left!
Do you train primarily BJJ or Karate, or both?
Primarily Karate.
Do you have prior martial arts experience?
Yes; I started out in Tae Kwon Do when I was 11 years old and did that for around a year before having to let it go. In the eighth grade, my school district brought in martial arts as a PE substitute and I was able to continue doing MA through this program called Kickstart, which is affiliated with a style called Chun Kuk Do. I trained in Chun Kuk Do from 13 to 17 and advanced to red belt before, unfortunately, burning out. I also did competition sparring, kata, and demo.
What motivated you to first start training in martial arts?
Actually, my mother put me in martial arts (and swimming) as a way to deal with asthma. Being that I was obsessed with martial arts as a movie genre, I thought it was a great idea.
How did you first learn about JP Martial Arts Academy?
I’ve lived in JP since Aug 2012 and would walk past the dojo while it was in its building stages. I made a mental note of checking it out at the beginning of the following year.
What do you like most about training in Karate?
I like training in karate because I think there’s something really beautiful about going through steps for kata and then exhibiting hidden strength through sparring. I think my explanation makes kata and sparring sound like they’re worlds apart when they’re really two sides of the same coin.
How has training in martial arts changed or improved your life?
I think it’s made me a calmer, more centered person and has allowed me a positive space to channel emotions. Having martial arts in my life really helped me keep myself in check as a teenager.
What do you like the most about training at JPMAA?
I like the open, familial atmosphere. JPMAA is definitely a come-as-you-are dojo, and I’ve never felt uncomfortable or judged for how I look, how I present myself, etc. I think of my dojo mates as family.
What are your goals for your training?
Mentally: Patience and persistence. I can be a bit impatient, which is why I often try to learn many other things at the same time, which causes my actual goals for the next belt to fall by the wayside. Training kind of forces me to remember that I am not involved in a race and that if I am to learn something well, it will take time. Physically: Locking down some kata for one of my weapons (tonfa and bow).

JP Martial Arts owner and head instructor David Shim has this to say about Angela:
She works hard in class and I know that she has had to balance a college and graduate student life with her training. No small task that! She is a fierce competitor and she is known as “Killer 4” (“Killer” is a title that has developed for those of the female students in our school who when you go against them, you know you are in for a butt whoopin’). Angela is a terrific student and training partner. If you want to know where the holes are in your stand up game, spar with Angela and she will be more than happy to show you!!

Our mission at the JP Martial Arts Academy is to bring martial arts to the Jamaica Plain community, for the safety, protection, fitness and enjoyment of the community, families and children